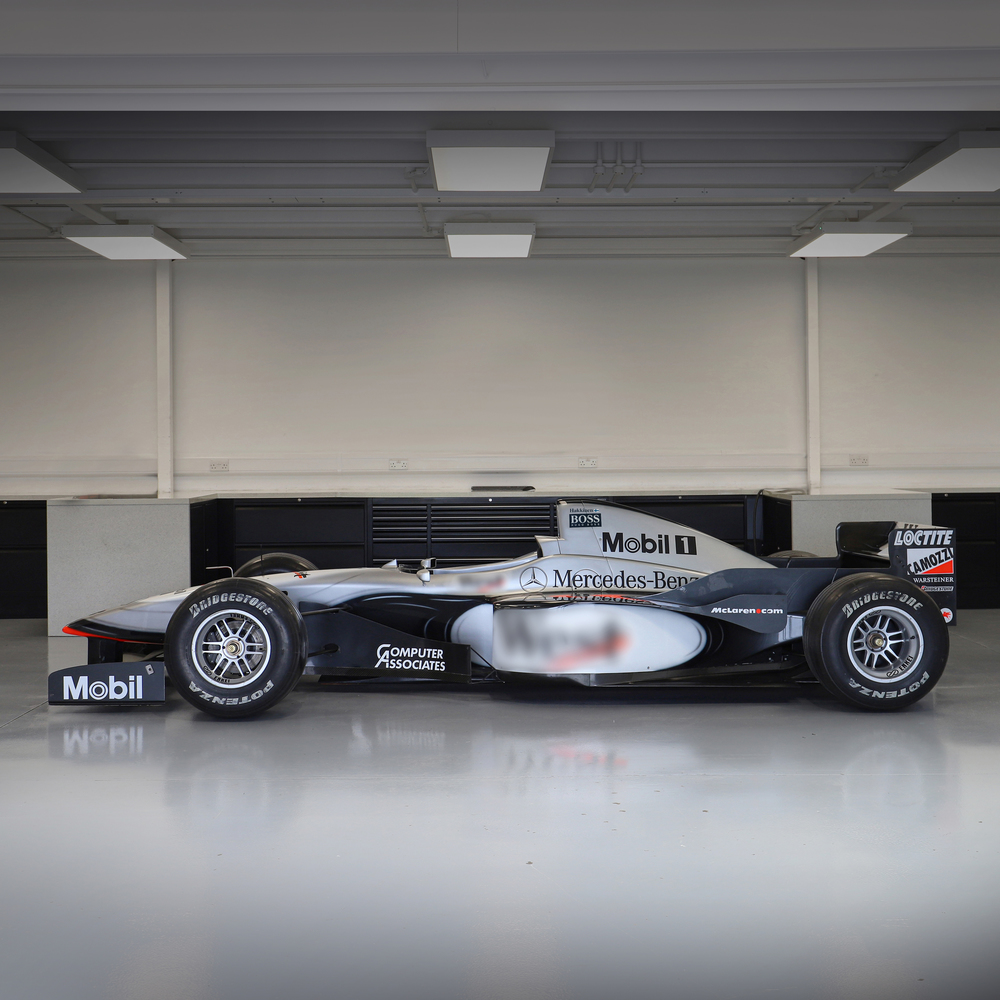 F1 Authentics is pleased to present this exceptional F1 show car, featuring a McLaren MP4-12 chassis from the 1997 FIA Formula One World Championship™.

The chassis used for this show car reflects those used on David Coulthard and Mika Häkkinen's McLarens during the 1997 season.

This season was strong, with McLaren finishing fourth in the Constructors' Championship that year.

For Coulthard and Häkkinen, it was equally as successful, with the Brit and the Finn finishing in third and sixth place respectively in the Driver Standings.

One thing that's of great interest is the MP4-12 was the car that feathered the extra brake pedal allowing the driver to brake steer.

Ferrari's protestations to the FIA led to the system being banned the following season at the 1998 Brazilian Grand Prix.

But was implemented on the 2012 McLaren 12C road car, controlled by computer and not an extra pedal.

This MP4-12/MP4-13 features Bridgestone tyres and sponsorship branding such as West, Mobil1, Mercedes-Benz and more.

It features Hakkinen's name on the engine cover.

The MP4-13 competed in the 1998 FIA Formula One World Championship™ - it was a Championship-winning season for Mika Häkkinen, and indeed the team.

With Häkkinen's teammate, David Coulthard finishing third in the Drivers' World Championship, it was a hugely successful and dominant year for the iconic team.

The MP4-13 won nine races in total in 1998, with Häkkinen claiming eight, and Coulthard one.

This item has been supplied to f1 Authentics by a Private Collector.

Please note: All auction items will include an Admin Fee of 5% of the winning price which will be added to the total when taken to checkout.

Scroll to right for more details

What is Auto Bid Extend?

The Auto Bid Extend feature ensures that bidders will always have a chance to challenge bids placed in the final seconds of an auction. When indicated on a listing page, if a bid is placed during the last 5 minutes of an auction, the auction will automatically extend for an additional 5 minutes from the time of the latest bid. The auction will close once all bidding activity has stopped for a period of 5 minutes.

NOTE: Current Bid Amount and Countdown Timer are not "live." Click Refresh to update them or to see if the auction has been automatically extended by a last minute bid.

Real Time Bid Refresh is no longer active on the site

Want to keep up to date with our latest auction items and discover the story behind each piece of racing memorabilia? Sign up below to opt in for subscription emails from F1 Authentics and be among the first to hear about new launches!